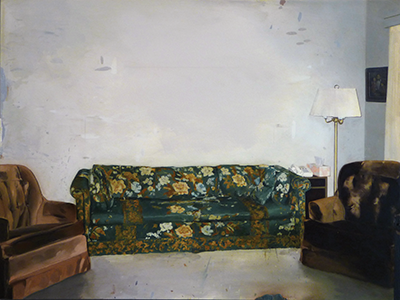 Boise-based artist Charles Gill was born in Caldwell in 1933. He began painting when he was only twelve years old. In 1955, he received a BFA from the California College of Arts and Crafts, where he studied with Richard Diebenkorn. In 1961, he received an MFA from Mills College. Gill taught for forty years, primarily at the California College of Arts and Crafts. He has made Boise his home since retirement.

Gill considers keen observation to be essential for both making and experiencing art. He is interested in the idea of the museum as an observatory, a place to look. Much of his subject matter is domestic interiors and suburban landscapes, but he wants viewers to look beyond the furniture and the neatly manicured lawns to the spatial relationships among forms. This exhibition brings together a diverse array of artworks—paintings, drawings, prints, bricolages, and an altered book—created over the course of the last three decades. Many of the works explore the same subject in different media. For example, compositions from Gill’s altered book served as the inspiration for large-scale oil paintings and charcoal drawings. The exhibition has been arranged to maximize connections between the works, and visitors are encouraged to look closely for visual links.