Ideas about the American West, both in the popular imagination and in commonly accepted historical narratives, are often based on a past that never was, and fail to take into account important events that actually occurred. “The West” can conjure images of rugged colonial settlers, gun-toting-cowboys, or vacant expanses of natural beauty. Many Wests: Artists Shape an American Idea offers multiple views of “The West” through the perspectives of forty-eight modern and contemporary artists. Their artworks question old and racist clichés, examine tragic and marginalized histories, and illuminate the many communities and events that continue to form this region of the United States. The exhibition explores the specific ways artists actively shape our understanding of the life, history and myths of the American West.

National Tour
Many Wests features artwork from the permanent collections of the Smithsonian American Art Museum and four partner museums located in some of the fastest-growing cities and states in the western region of the United States. The collaborating partner museums are the Boise Art Museum in Idaho; the Jordan Schnitzer Museum of Art in Eugene, Oregon; the Utah Museum of Fine Arts in Salt Lake City; and the Whatcom Museum in Bellingham, Washington. It is the culmination of a multi-year, joint curatorial initiative made possible by the Art Bridges Foundation

This is one in a series of American art exhibitions created through a multi-year, multi-institutional partnership formed by the Smithsonian American Art Museum as part of the Art Bridges Initiative.

Boise Art Museum is committed to accessibility and inclusion. We believe that exhibitions designed with the needs of a range of people of varying abilities enrich the experiences of all visitors. New learning and engagement affordances to welcome people with low or no vision, no or low hearing, and other differences of ability are being piloted within this exhibition.

Throughout the exhibition, you will see icons indicating the affordances we have created, including Tactile Representation Models and an Audio Guide with Label Text, Visual Descriptions, and Artist Comments being read aloud.

It is our goal to welcome the widest possible audience, and we would love to hear from you to know how we can make your experience more comfortable and enjoyable.

Welcoming everyone to the Boise Art Museum as a place to come together and learn requires a continuous focus on inclusivity as integral to everything we do. We are grateful to the funders who are helping us to meet this goal.

Audio Guide
Label Text, Visual Descriptions, Artist Comments
Access the Audio Guide with your cell phone. A black rectangle at the bottom of the artwork label provides the phone number and artwork sequence number on the left overlaid with braille, and a QR code on the right overlaid with tactile relief corners. Call the number to listen to the Audio Guide, or scan the QR code with your smartphone to access accessibility offerings located on BAM’s website.

BAM’s Website
BAM’s website includes audio and text transcripts that are accessible to those using assistive technologies such as a screen reader and zoom.

Large-Print Labels
Large-Print copies of wall labels will be available at the admissions desk for use in the Museum. You can also download a copy for use on your own device.
English (.pdf)  |  Español (.pdf)

This program is supported in part by a grant from the Idaho Humanities Council, a state-based program of the National Endowment for the Humanities.

BAM gratefully acknowledges the generosity of the following donors, who have sponsored selected works of art in this exhibition. Look for their names near the artwork labels.

Whose Wild West Is It? – Eugene Weekly

“I do portraits because it’s a reflection of our humanity.”

ABOUT | Protagonist of an Endless Story by Angel Rodríguez-Díaz

Known for his richly textured and painterly style, Angel Rodríguez-Díaz has spent the last several decades painting portraits of important cultural icons of San Antonio and the Southwestern United States. The “protagonist” of this painting is renowned Chicana novelist and poet Sandra Cisneros, best known for her debut novel, The House on Mango Street. Cisneros stands before a fiery sunset, dressed in a traditional Mexican skirt embroidered with sequined imagery that refers to her profession as a writer. Her commanding pose, reminiscent of Old Master portraits, proclaims that she will endure in her native landscape. In the work’s title, as well as its composition, the artist asserts that Chicanx culture will not be erased.

Rodríguez-Díaz painted the portrait Protagonist of an Endless Story for his friend, famous author Sandra Cisneros. After the Smithsonian American Art Museum acquired this painting, Rodríguez-Díaz painted a second portrait for Cisneros. The pose, dress, and bold composition reference the heroine, Inés Alfaro, in the story Eyes of Zapata from her book Woman Hollering Creek. Set during the Mexican Revolution (1910-20), Cisneros presents a fictionalized version of Emiliano Zapata (1879-1919), a real man who led a revolutionary group that fought for land rights. In the story, Cisneros gave Zapata’s mistress Inés and her female family members magical powers, such as the gift of prophecy and the ability to hover high over the village to get a bird’s eye view, significant metaphors for resilience in the face of suffering.

“My sky, my life, my eyes.  Let me look at you.  Before you open those eyes of yours.  The days to come, the days gone by.  Before we go back to what we’ll always be.”

From Eyes of Zapata by Sandra Cisneros

The Protagonist of an Endless Story, 1993
oil on canvas

Other well-known artists who create portraits

One of the histories often untold about the west is the forced relocation and incarceration of nearly 120,000 Japanese Americans in the U.S. during WWII—a story illustrated through Wendy Maruyama’s sculpture, Minidoka. Most residents of Idaho are unfamiliar with the history of Camp Minidoka, a Japanese-American incarceration camp from 1942–1945, located in south central Idaho. Although the tar-paper-covered barracks no longer exist, the memories of the incarceration lives on for those who spent years of their lives there and for their families today.

Maruyama has said, “the most haunting and striking photos were of the families wearing tags at the various assembly centers before being shipped off by train to those remote areas. Every man, woman, and child was issued a tag with their name, a government-issued number, and the destination camp. I realized the tags were emblematic of the experience, so I decided that I would create the Tag Project. I wanted to create all the tags for every Japanese American who was incarcerated during 1942.” In completing the project, she not only addressed Japanese-American incarceration, she also saw relevance to 9/11, the treatment of Muslim Americans, and changing immigrations laws.

ABOUT | Wendy Maruyama, Minidoka from the series Tag Project

The entire Tag Project was part of a companion body of work, Executive Order 9066, addressing the forced evacuation and incarceration of Japanese Americans between 1942 and 1945, after the bombing of Pearl Harbor.  Maruyama’s maternal family was directly affected by these events, but the artist learned little about it from her family members.  She first learned about the incarceration of Japanese Americans through government photographs taken by Dorothea Lange and Toyo Miyatake.

The Tag Project consists of 120,000 replicas of the paper identification tags that incarcerees were required to wear when they were being forcibly relocated.  Ten tag bundles hang from the ceiling and each represents one of the ten incarceration camps throughout the U.S.  In Minidoka, the tag-bundle sculpture, displayed in BAM’s Many Wests exhibition, 11,000 tags represent the number of people who were incarcerated during 1942 at Camp Minidoka in south central Idaho.  The artwork conveys aspects of perseverance and reminds us of past events so that we have better informed perspectives for decisions in our present and future. 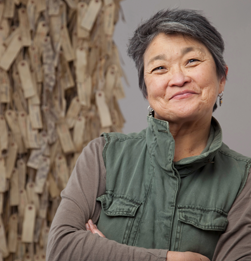 Furniture maker, artist, and educator Wendy Maruyama has been making innovative work for 40 years. While her early work combined ideologies of feminism and traditional craft objects, her newer work moves beyond the boundaries of traditional studio craft and into the realm of social practice.

Since 1994, Maruyama has been creating works inspired by the memory of her childhood growing up as a Japanese American, her interpretation of her ethnic heritage, and her observations of the Japanese culture, looking in from the outside. Born in La Junta, Colorado, to second-generation Japanese-American parents, she has made several pilgrimages to the land of her heritage, Japan.

Ages 12+ | They Called Us Enemy by George Takei (Graphic Novel)

Ages 16+ | Looking Like the Enemy by Mary Matsuda Gruenewald (Autobiography)

Adult | Looking After Minidoka:  An American Memoir by Neil Nakadate