Shortly after the bombing of Pearl Harbor on December 7, 1941, President Franklin D. Roosevelt issued Executive Order 9066, which forced nearly 120,000 Japanese American citizens and legal resident aliens of Japanese descent to relocate from California, Oregon, Washington, and Alaska to one of ten inland war relocation centers, as they were termed by the U.S. government at that time.

From 1942 (when the EO 9066 was issued) to 1945, more than 13,000 evacuees were incarcerated at the Minidoka War Relocation Center in south central Idaho. The exhibition Minidoka: Artist as Witness features significant works by five artists with personal or family history at Minidoka, now a National Historic Site.

Three of the artists included in the exhibition—Takuichi Fujii (1891-1964), Kenjiro Nomura (1896-1956), and Roger Shimomura (b. 1939)—were relocated to Minidoka from Seattle, Washington, with their families during WWII. Both Fujii and Nomura painted a large number of works during their incarcerations. Their watercolors, set in the terrain of southern Idaho, are dotted with barbed wire and guard towers, providing intense and intimate depictions of the Japanese American incarceration experience.

Also on view are large-scale paintings by Roger Shimomura, who spent two years at Minidoka as a young boy. In The Lineup, which portrays a group of men and boys queuing outside the lavatory, Shimomura intends to lay bare the uncomfortable and often humiliating day-to-day realities of living at Minidoka. In American Infamy No. 2, on the other hand, he means to expose the political and military mindset that allowed EO 9066 to go unchecked.

Artist and woodworker Wendy Maruyama (b. 1952) recently created a large body of work related to EO 9066, which consists of wall-mounted cabinets and sculptures. Incorporating photographic transfers of well-known images by Dorothea Lange and Toyo Miyatake as well as found objects that were prevalent in the camps, Maruyama’s poignant works act as a visual testament to the incarceration of Japanese Americans. Additionally, Maruyama’s installation of 10 large-scale suspended sculptures made of 120,000 recreated paper identification tags offer a powerful expression of the number of individuals who were forced into incarceration.

Selected works from photographer Teresa Tamura’s (b. 1960) recent book project Minidoka: An American Concentration Camp will also be on view. Tamura’s photo series documents Minidoka today and follows up with former residents. The first photograph she took for the series is a portrait of artist Roger Shimomura, which was taken at the Boise Art Museum in 2001—the same year that President Clinton designated 72.75 acres of the original Minidoka War Relocation Center as the 385th National Park Service unit. 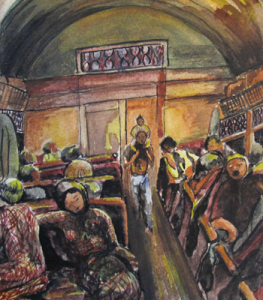 TAKUICHI FUJII
Born in 1891, Takuichi Fujii was a first generation Japanese American, or Issei. He lived in Seattle, Washington, with his wife and two daughters, ran a small business, and was a regionally recognized artist. His pre-war works often include Seattle’s Japantown neighborhood, the working waterfront, and views of eastern Washington.

When war broke out between the United States and his native Japan, his family was uprooted and incarcerated, first at Camp Harmony—the temporary detention center in Puyallup, Washington—and later at Minidoka. Fujii kept an extensive, illustrated diary during his detention, in addition to completing a number of paintings. Until recently, these works remained undiscovered.

Fujii resettled in Chicago after his release. He experimented broadly with abstraction in his postwar work. Fujii died in 1964 with his wartime and later work unknown. 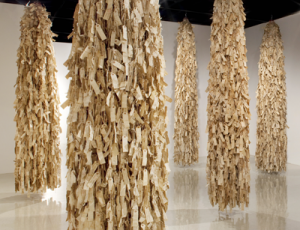 WENDY MARUYAMA
Born in La Junta, Colorado in 1952, Wendy Maruyama is a Sansei, or third generation Japanese American. She was raised mostly unaware of Japanese culture, only beginning to explore her heritage as an adult. She often references Japanese cultural items to explore feminist and environmental themes in her exquisitely constructed, fine art furniture.

Maruyama’s first visual experience of the incarceration of Japanese Americans was through government documentary photographs. Although her family was directly affected, they chose not to address the experience, leaving Maruyama to examine it herself, through her art.

Maruyama graduated with a BA from San Diego State University in 1975; in 1980, she became one of the first two women to receive an MFA in Furniture Making from the Rochester Institute of Technology. 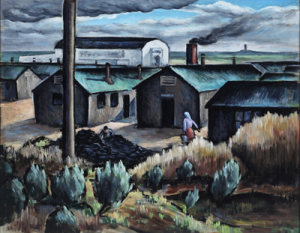 KENJIRO NOMURA
Kenjiro Nomura was born in Gifu, Japan, in 1896. His family moved to Tacoma, Washington, when he was ten years old. When Nomura’s parents returned to Japan six years later, he stayed in Washington and earned a living by painting signs. Eventually he opened up his own sign shop. He married a woman named Fumiko Mukai, and they had a son, George.

The Nomura family’s life was interrupted when they were forcibly removed from their home following Executive Order 9066. They were first sent to Camp Harmony in Puyallup, Washington, and later to Minidoka. Throughout his incarceration, Nomura continued to paint, depicting both public and private aspects of his life in the camps.

Although Nomura achieved some recognition as an artist in his lifetime, he was never able to make a living from his art as he wished. He died in 1956.

Artwork on loan from the Tacoma Art Museum 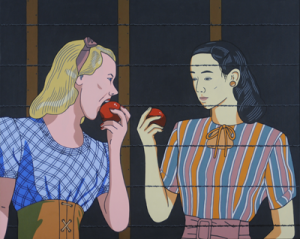 ROGER SHIMOMURA
Roger Shimomura was born a Sansei, or third generation Japanese American, in Seattle, Washington, in 1939. Despite being American citizens, the Shimomuras were incarcerated at Minidoka for two years, following Executive Order 9066. The experience weighed heavily on the family, and Shimomura’s post-
incarceration childhood was mostly absent of Japanese cultural influence. The artist felt disconnected from both American and Japanese cultures; this isolation fueled many of his early works.

Shimomura is Professor Emeritus at the School of Fine Arts at the University of Kansas, and has a highly distinguished exhibition record. His personal papers are being collected by the Smithsonian Institution’s Archives of American Art in Washington, D.C.

Artwork on loan from Roger Shimomura 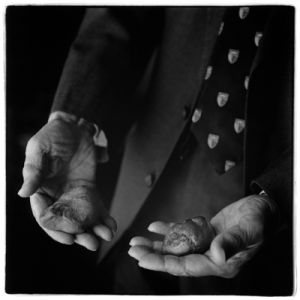 TERESA TAMURA
Born and raised in Idaho, Teresa Tamura is a Sansei, or third generation Japanese American. She began working on her book project—Minidoka: An American Concentration Camp—after President Clinton designated Minidoka as a National Historic Site in 2001. Using both traditional black-and-white and infrared film, Tamura’s work depicts former Minidoka detainees and documents their incarceration experiences. She has also photographed what remains of the camp today.

Artwork on loan from Teresa Tamura