Re-Framed examines the notion of a shared American identity while recognizing the complexity of factors that determine each person’s cultural and social viewpoints. Featuring artworks from the Permanent Collection that have not recently been shown, Re-Framed presents a multiplicity of artists who offer meaningful insights into both a personal and collective American experience.  Exploring a range of ideas and perspectives that define us as a nation, this exhibition encourages a deeper reflection on the similarities and differences that comprise our diverse culture.

Take a virtual tour of Re-Framed

Artist Spotlight | Loretta Pettway and the Artists of Gee’s Bend

Loretta Pettway is a descendent of the quilting matriarchy at Gee’s Bend, Alabama. The women of Gee’s Bend—a small, rural community—have a tradition of quilt making, dating from the early twentieth century to the present. Most of Gee’s Bend’s residents are descendants of slaves, who, for generations, worked the fields of the Pettway plantation. Working in her family’s traditional, improvisational style, Pettway fashioned this quilt from strips of old clothing and scrap fabric found at home or given to her by friends. Today, she is known for her innovative abstract designs that create bold rhythms. Her distinctive style evokes the Housetop and Bricklayer patterns, also known as Pig Pen pattern, in which colorful blocks are composed of fabric strips and placed within a larger fabric border.

“When I see my quilts on that wall in that museum, and all the people come in and look at our work, it just makes me feel good. God has blessed me. And I tell him, ‘Thank you for your many blessings. Continue blessing everybody.’ We all need a blessing.“ – Loretta Pettway

In 1845, approximately thirty years after Joseph Gee first purchased the area of land known locally as Gee’s Bend, his relative Mark Pettway acquired the plantation and imposed the name “Pettway” on those he enslaved. Consequently, Pettway remains the most popular surname in Gee’s Bend. Following Emancipation, most of the freed slaves stayed to work the land as tenant farmers. Their descendants followed suit until the 1940s when the Roosevelt Administration helped locals purchase their own farmland in response to the damaging effects of the Great Depression. The fall of cotton prices and the repossession of their belongings and food reserves to pay off tenancy debts left the community destitute. If not for the aid of the American Red Cross and subsequent government assistance, the Gee’s Bend residents would have died of starvation. As landowners, many of the residents were able to pay back their debts and become truly free people. During these trying times, the Gee’s Bend quilters had to unravel feed sacks for thread and piece their quilts from scraps of worn work clothes, flour and feed sacks, mattress ticking, and cotton dresses.

Perhaps the intense struggle to survive their difficult past is what fueled the residents of Gee’s Bend to actively participate in the Civil Rights Movement. Most of the community members went to hear Martin Luther King Jr. speak at the local Pleasant Grove Baptist Church in 1965 and many then marched beside him on multiple occasions at Camden and Selma. The costs borne by the Gee’s Benders were high:  after they marched for Civil Rights in 1965 in Camden—the nearest town and county seat—the ferry service that connected Gee’s Bend to Camden (and the outside world) was abruptly closed down, turning the five-mile commute into a forty-mile overland trip. It would be four decades before the ferry was restored.

The quilts of Gee’s Bend showcase the genius of a group of exceptional women who, for well over a century, have created distinctive works of art renowned for their visual appeal and compelling history. The artists of Gee’s Bend have produced hundreds of textile masterpieces. Throughout much of the twentieth century, making quilts was considered a domestic responsibility for the African-American women in their community. These artists are the inheritors of a tradition that was passed down through their families. As young girls, many of the women trained or apprenticed in their craft with their mothers, female relatives, or friends. The African-American expressive qualities distinctive to Gee’s Bend artists favor visual drama over laborious technique, surprise over painstaking repetition and originality over predictability. The resulting quilts have bold, geometric designs distinctive to Gee’s Bend, yet innovation and variation exist in each quilter’s style. The quilts of Gee’s Bend reveal a particular place and its people, who have created an immense body of textile art rich in content and remarkable in its aesthetic achievement.

In late spring of 2005, Mary Lee Bendolph and Louisiana Bendolph traveled to Berkeley, California, to work with Paulson Press, a fine art publisher. Paulson Press specializes in etching (a type of printmaking) an entirely new medium for the quilt makers. The artists created small fabric maquettes—essentially, miniature quilt tops—that were then coated with beeswax and used as the basis for making the printing plates. Gradually the Bendolphs learned to participate in every phase of the process to steer the maquette through its metamorphosis to a print. The quilters even used paintbrushes to manipulate wet inks to resemble fabric-like textures. In 2006, the Foundation for Art and Preservation in Embassies (F.A.P.E.) commissioned the artists to create an edition to be included in US Embassies around the world. There are currently three prints by the artists of Gee’s Bend in Boise Art Museum’s Permanent Collection. 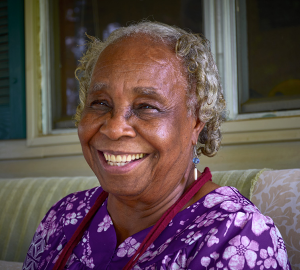 “…I see the barn, and I get an idea to make a quilt. I walk outside and look around in the yard and see ideas all around the front and back of my house. Then, sitting down looking at a quilt, I get another idea from the quilt I already made… As soon as I leave the house, I get ideas. If I go to church or someplace where a lot of people are at, I can see a pattern that I can take and make a quilt with.” – Mary Lee Bendolph

Stitchin’ and Pullin’: A Gee’s Bend Quilt by Patricia McKissack and Cozbi A. Cabrera

The Quilts of Gee’s Bend by Susan Goldman Rubin