Crow’s Shadow Institute of the Arts at 25 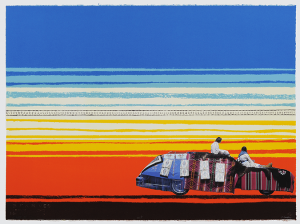 The Crow’s Shadow Institute of the Arts (CSIA) was founded by Oregon painter and printmaker James Lavadour, in 1992. This exhibition, organized by the Hallie Ford Museum of Art in partnership with Crow’s Shadow, chronicles the history of the institute over the past twenty-five years as it has emerged as a nationally recognized printmaking studio. Situated on the Confederated Tribes of the Umatilla Indian Reservation near Pendleton, Oregon, it is perhaps the only professional printmaking studio located in a reservation community in the United States.

The exhibition features original prints drawn from the Crow’s Shadow Print Archive and focuses on themes of landscape, abstraction, portraiture, word and images, and media and process. Included in the exhibition are works by fifty-one Native and non-Native artists who have worked at CSIA, including Rick Bartow, Pat Boas, Joe Feddersen, Edgar Heap of Birds, James Lavadour, Truman Lowe, Lillian Pitt, Wendy Red Star, Storm Tharp, and Marie Watt, among others.

Organized by the Hallie Ford Museum of Art at Willamette University in partnership with the Crow’s Shadow Institute of the Arts, The Crow’s Shadow Institute of the Arts at 25 was supported by a major grant from the Ford Family Foundation. Additional financial support was provided by a grant from the James F. and Marion L. Miller Foundation; with funds from an endowment gift from the Confederated Tribes of Grand Ronde, through their Spirit Mountain Community Fund; and by general operating support grants from the City of Salem’s Transient Occupancy Tax funds and the Oregon Arts Commission.

The presentation at the Boise Art Museum is made possible by THE FOUR J FOUNDATION.

This is the first of five exhibitions in BAM’s Native Voices series celebrating Native American artists. The United Nations declared 2019 the International Year of Indigenous Languages, and this suite of exhibitions highlights Native voices, expressed through the language of visual art, in tandem with this important international declaration. The series also includes the following exhibitions: Ceramics and Textiles from the Southwest: Gifts of the Carley Collection, Sarah Sense: Cowgirls and Indians, Margaret Jacobs: Steel Medicine, and Wally Dion: Current.