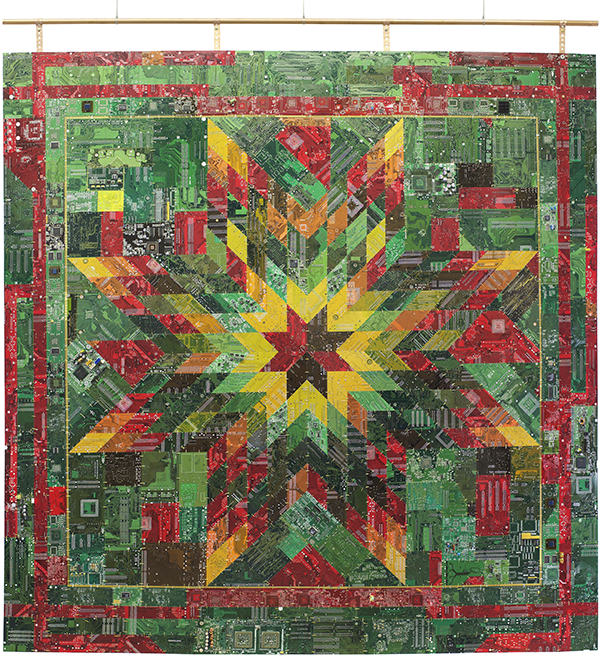 Mixing the contemporary with the traditional, Wally Dion uses materials such as circuit boards and auto paint to create his own renditions of Indigenous quilt patterns. Dion’s quilt assemblages are an extension of his portraiture of First Nations workers, and serve as a way to represent those who work in industries such as childcare, education, software and information management, and communications. Dion draws inspiration from artists such as Indigenous Canadian painter Bob Boyer, and quilting bees during which First Nations women historically gathered to make quilts for burials, dances, and other ceremonies. This exhibition features three of Dion’s quilts.

Wally Dion is from Saskatoon, Saskatchewan, Canada, and is a member of Yellow Quill First Nation (Saulteaux). He received an MFA in painting from the Rhode Island School of Design in Providence, Rhode Island. Dion is the recipient of numerous grants from organizations such as the Canada Council for the Arts and the Saskatchewan Arts Board, and has exhibited throughout Canada as well as in the US.

This is the fifth and final exhibition in BAM’s Native Voices series celebrating Native American artists. The United Nations declared 2019 the International Year of Indigenous Languages, and this suite of exhibitions highlights Native voices, expressed through the language of visual art, in tandem with this important international declaration. The series also included the following exhibitions: Crow’s Shadow Institute of the Arts at 25, Ceramics and Textiles from the Southwest: Gifts of the Carley Collection, Sarah Sense: Cowgirls and Indians, and Margaret Jacobs: Steel Medicine.