Outside the Lines is the fourth and final exhibition inspired by Boise Art Museum’s Art Cards, a project designed to encourage engagement with artworks in BAM’s Permanent Collection. Based on the Art Card deck True Colors, this exhibition explores the ways in which artists employ the elements of art and principles of design to convey mood, provoke emotional responses, and communicate with viewers. While the artworks are organized in themes of Line; Shape and Form; Space; Color and Value; and Texture; these categories often overlap. With the principles of design (such as balance, rhythm, emphasis, pattern, contrast, unity, and movement), artists can use the elements of art to create their expressions in a vast number of ways, as demonstrated by the diversity of artwork presented in this exhibition. 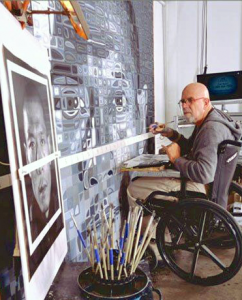 Chuck Close is one of America’s most famous and respected living artists. He has had a remarkable artistic career spanning more than 30 years as a painter, photographer, and printmaker. Growing up in Tacoma, Washington, he always knew he wanted to be an artist. Chuck has dyslexia, so learning was not easy for him. He invented his own coping and studying mechanisms and graduated from high school, received a Bachelor of Arts degree from the University of Washington, and earned a Master of Fine Arts degree from Yale University. He also suffers from prosopagnosia, commonly called face blindness, which makes it difficult for him to remember faces, but he has a photographic memory for things that are flat. By focusing on portraits of important people in his life, he helps to commit their images to memory by taking three-dimensional faces and making them into two-dimensional works of art. Chuck was already a famous artist in 1988 when he became paralyzed from the shoulders down due to a spinal aneurism. He spent painful months in rehabilitation and eventually gained partial use of his arms and legs. He is dependent upon a wheelchair and straps a brush to his hand to paint on a canvas. The canvas is connected to a special device that lowers and raises the canvas and rotates it 360 degrees. Although, at first glance, Chuck Close’s works of art may look as if they were computer generated, they are all created by hand. His paintings take several months to finish, and it is not unusual for one print to take up to two years to complete! 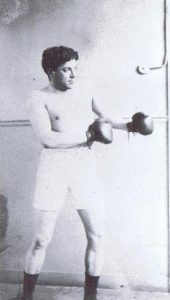 Seattle artist Fay Jones is particularly interested in the artwork of the early modernist artist Georges Braque. While reading a book on the artist, Jones became intrigued with a 1909 photograph of Braque dressed as a boxer in shorts and wearing gloves (pictured). Jones’ self-portrait is based on the figure of Braque in his photograph and imitates the stance of the artist. In painting the figure, Jones transformed the body from masculine to feminine. Braque’s straight hip became her curved hip and his face became her face as if she were superimposed over his body. Jones wanted to acquire the spirit of this artist whom she admires immensely.

This self-portrait is meant to represent Jones’ emergence as an artist and reflects her feelings about the fragile nature of being an artist. It symbolically describes her struggle to succeed.

Jones takes full advantage of the use of personal symbols as a means to express emotions.  Unpredictably she repeatedly inserts palm trees, fish, houses, clocks, sailors, boxing gloves and other details in her compositions.  These images represent ideas about far off places, nourishment, domesticity, history, romance and marriage.  It is a language, once recognized, that gives you a key to the artwork.

Born in Boston, Massachusetts, Fay Jones received a BFA from the Rhode Island School of Design in 1957. Awards she has received include the Joan Mitchell Painters and Sculptors grant in 2013, the Seattle Art Museum’s 2006 Poncho Artist of the Year award, grants from the NEA in 1983 and 1990, the Washington State Arts Commission in 1984, and La Napoli Art Foundation in 1989. Her work has been extensively collected in the Northwest, and is included in the collections of the Portland Art Museum and the Hallie Ford Museum of Art in Oregon, and the Seattle Art Museum and the Tacoma Art Museum in Washington, as well as the Cities of Seattle and Portland. Major exhibitions include a 2007 retrospective at the Hallie Ford Museum of Art at Willamette University, a 1997 traveling retrospective with the Boise Art Museum, and exhibitions at the Portland Art Museum, the Seattle Art Museum, the Museum of Northwest Art in La Conner, WA, the Anchorage Museum of History and Art, and the Palm Springs Desert Museum in California.i

The bold yellow background fills the entire paper. Black clovers, spades, circles and flowers, reminiscent of Scandinavian design, cover the left and right sides of the picture plane in square patterns. The ticket is printed, slightly askew, in blue, over the top of the black symbols and the yellow background. While the text is nearly obscured in some areas, the central part of the ticket is easy to read and includes information such as the date and the stops on the trip as well as the passenger’s name, Andy Warhol. This silkscreen was created for an exhibition in Stockholm at the Moderna Museet, and later traveled to museums in Amsterdam, Switzerland and Norway. It is one of Warhol’s earliest published prints and is representative of Warhol’s entire body of work in the way that the artist elevates an everyday, common object to an image of art.
.

Obsessed with celebrity, consumer culture, and mechanical re-production, Pop artist Andy Warhol created some of the most iconic images of the 20th century. The artist drew widely from popular culture and everyday subject matter, creating works like his 32 Campbell’s Soup Cans (1962), Brillo soap pads box sculptures, and portraits of Marilyn Monroe, using the medium of silkscreen printmaking to achieve his characteristic hard edges and flat areas of brilliant color. He is possibly just as famous for his quips as he is for his art.  Among his most notorious quotes are, “art is what you can get away with,” and, “everyone will be famous for 15 minutes.”

Warhol was a mentor to artists like Keith Haring and Jean-Michel Basquiat. While he was considered an innovator in art, the artist’s Pop sensibility is now standard practice, undertaken by major contemporary artists such as Richard Prince, Takashi Murakami, and Jeff Koons, among countless others. Learn more about the artist from The Andy Warhol Museum.

“[Blankets] are enduring records of people’s lives. I look for the signs of their stories–mended spots, their shapes no longer square, but echoing the bodies that inhabit them; satin bindings that I consider ledger-like and the place that dreams might be captured; the occasional moth buffet; and permanent soiled marks, perhaps a right of passage, like a birthmark or tattoo.”
-Marie Watt
Clarice Smith Distinguished Lecture Series: Artist Marie Watt »
Smithsonian American Art Museum

Artist Marie Watt uses symbolic materials, such as reclaimed blankets, to communicate ideas about her First Nations’ heritage. The artist draws attention to simple everyday items in our lives that are infused with meaning, but are often taken for granted. Inspired by Native American blankets and their history, Watt’s wall-hung fiber works explore cultural identity by combining the ancient form of blanket making with the aesthetics of 20th-century modern painting. Watt received an MFA in Painting and Printmaking from Yale University.

A key feature of the Native American spiritual outlook is found in the powers ascribed to the Four Directions, North, South, East and West, which occur in stories, either literally or in symbolic form. The Four Directions need to be in balance for all to be well with the world and are represented by Watt with the coming together of the satin bindings in the center of Ledger. The drooping satin binding may represent a central point of balance, or imbalance, to represent a fifth direction.

Marie Watt (b. 1967) is an American artist and citizen of the Seneca Nation with German-Scots ancestry.  Watt was born and raised in Seattle, Washington, and currently resides in Portland, Oregon. She holds an MFA in painting and printmaking from Yale University; she attended Willamette University and the Institute of American Indian Arts; and in 2016 she was awarded an honorary doctorate from Willamette University. She currently serves on the board for VoCA (Voices in Contemporary Art) and on the Native Advisory Board for the Portland Art Museum.

Watt has received public art commissions from the Tacoma Art Museum, the Bill and Melinda Gates Foundation, the Denver Art Museum, and the United States Embassy in Islamabad, Pakistan, through the US State Department’s Art in Embassies program.